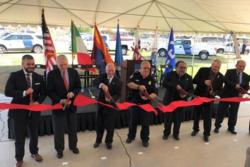 AN LUIS, Ariz. -- Today, the U.S. General Services Administration (GSA), the U.S. Department of Homeland Security - Customs and Border Protection (CBP) and city of San Luis hosted a ribbon-cutting ceremony at the San Luis I Land Port of Entry (LPOE) to celebrate the opening of a newly constructed pedestrian processing building at the port.https://www.gsa.gov/about-us/regions/welcome-to-the-pacific-rim-region-9/region-9-newsroom/pacific-rim-press-releases/gsa-cbp-city-of-san-luis-host-ribboncutting-ceremony-for-new-pedestrian-processing-annex

SAN LUIS, Ariz. -- Today, the U.S. General Services Administration (GSA), the U.S. Department of Homeland Security - Customs and Border Protection (CBP) and city of San Luis hosted a ribbon-cutting ceremony at the San Luis I Land Port of Entry (LPOE) to celebrate the opening of a newly constructed pedestrian processing building at the port. Speakers from the U.S., and Mexican governments joined local government officials to open the facility for the San Luis, Ariz., and San Luis Rio Colorado, Sonora, Mexico, region.

“GSA is excited to work with CBP to deliver this state-of-the-art facility,” said GSA’s Pacific Rim Regional Administrator Tom Scott. “We are thrilled to help our federal-inspection agency partners better serve the traveling public and meet their mission of securing the border and facilitating travel and trade."

“This project delivers a facility that allows for improvement of pedestrian processing for cross-border travelers entering the U.S., in a safe and more efficient manner,” said CBP Acting Director of Field Operations Tucson Petra Horne. “These improvements allow CBP to continue to protect our nation’s borders while facilitating the trade and flow of commerce between the United States and Mexico.”

“The San Luis I Land Port of Entry is a vital part of Arizona’s economy with more than 3 million vehicles and 2.5 million pedestrians crossing annually, and is the main border crossing for farm workers commuting to work in Yuma County,” said U.S. Senator Jon Kyl (Arizona). “The $6 million Federal investment in this new pedestrian annex will provide much needed capacity that will allow shoppers, tourists and farmworkers entering Arizona to be screened more efficiently while ensuring public safety is maintained.”

“The modernization of our ports of entry is critical to ensuring a strong partnership between the United States and Mexico,” said U.S. Representative Raúl M. Grijalva (AZ-03). “Security and economic issues don’t stop at the border, and these upgrades to the port of entry will ensure a more efficient and secure flow of people between our two countries that will make border communities safer and facilitate greater economic activity.”

"Safe, secure and efficient ports are critical to growing Arizona jobs and our economy," said Arizona Governor Doug Ducey. "This expansion is an essential improvement that will help achieve those goals while also improving the flow of commerce and people at the San Luis I Port of Entry."

Located at Highway 95 and International Border in San Luis, AZ, pedestrian traffic at the San Luis I exceeded the screening capacity of the previous facility. As a result, GSA built the new northbound pedestrian annex to expand pedestrian processing capacity. This $6 million project is designed to lower operating and life-cycle costs despite its location in a desert climate. To generate cost savings for the American taxpayer, solar panels, high levels of insulation and use of natural lighting were incorporated into the building along with low-use water fixtures and native landscaping to help the facility thrive in extremely dry conditions.

The San Luis I LPOE is the second busiest non-commercial port in Arizona, processing more than 3 million vehicles and 2.5 million pedestrians each year. The port of entry was originally constructed as a multimodal port for commercial and non-commercial crossing. In 2010, commercial operations shifted to a new port referred to as San Luis II LPOE, located approximately eight miles to the east of San Luis I.

U.S. General Services Administration
The mission of GSA is to deliver best value and savings in real estate, acquisition, technology and other mission-support services services across government.

U.S. Customs and Border Protection
CBP's Office of Field Operations is the primary organization within the U.S. Department of Homeland Security tasked with an anti-terrorism mission at our nation’s ports. CBP officers screen all people, vehicles, and goods entering the United States while facilitating the flow of legitimate trade and travel. Their mission also includes carrying out border-related duties, including narcotics interdiction, enforcing immigration and trade laws, and protecting the nation's food supply and agriculture industry from pests and diseases. 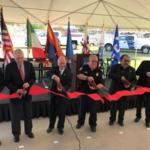