San Luis I Port of Entry has Growing Support

On March 11, the Trump Administration submitted their Fiscal Year 2020 Budget Request to the U.S. Congress.  As part of the budget request, $248.3 million was included under the General Services Administration  portion for the modernization and expansion of the San Luis I port of entry.

In addition to the initial support from the City of San Luis, other entities have joined their efforts to support the funding, including the Arizona-Mexico Commission, and the Rural Transportation Advocacy Council.  Click the name of the organization for links  to sample letters.

Read more about the growing support for the project >>

GYPA is continuing to support San Luis I being funded for construction funds by the Federal Government as the final piece of the process that we started in the early 2000's. In FY08 President's budget was approved by Congress funding $8 million for the Design of San Luis I which GSA has in their coffers. San Luis I was over capacity when the Feasibility Study was conducted in late 2003 and early 2004. CBP has done their best to increase the movement of crossings but there is always another requirement added to the crossing process that seems to keep the crossing levels stagnant. The solution is to fund the construction of San Luis I which will expand the abilities of crossing more vehicles and pedestrians more efficiently and safely for both the public but also the CBP Officers whom protect our Country every day. Below is a photo of current conditions at San Luis I.

GYPA is seeking to find a Developer to lease the acreage that is available around San Luis II and develop the property and locate businesses that want facilities in that area which will create jobs for our citizens and provide the local communities more revenues through increased sales tax and property tax. 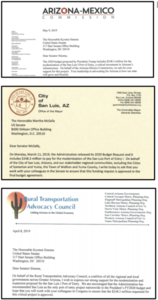 Above is  the original plan that came from the Feasibility Study completed in the spring of 2004.